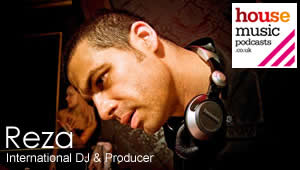 The team at House Music Podcasts were lucky enough to speak to the one and only Reza and asked him a few questions about his Dj Career! and what he has lined up over the next 12months.

1.How did you first get into DJing?

Back in 91 i used to go to a lot of Raves and watch the likes of Carl Cox which inspired me to start myself.

2.What was the first record you bought?

3.What have you been up to so far this year?

This year has been really good! i have produced tracks with the many people including Jonathan Ulysess, K Klass, Delicious etc and have had tracks and remixes on labels such as Pacha, Nervous, Armada, Kinky Digital, Born To Dance etc. This year i have played in England quite a lot and also in Poland, Ibiza, Belfast, Guernsey, Jersey etc.

4.How did you get your foot in the door?

Not really sure, through hard work and dedication i suppose!

5.What’s the best memory you have from behind the decks?

Basic, all software based.

8.What advice do you have for any up and coming DJs?

To be original, commited and nice to people!

9.Would you agree that you have to produce tracks now to get a name?

Either that or be female and where skimpy clothes.

10.What the largest venue you have played at this year?

El Divino in Ibiza or Deja Vu in Hull at their new venue is a fair size.

11.Whats your most successful track you have produced so far?

12.What in your opinion does it take to be a world class DJ?

Skill and the ability to read the crowd…i always say your eyes areas important as your ears.

CDJS mainly these days due to the fact you cannot get the tracks on vinyl anymore.

14.What are your top 3 tracks at the moment?

15.What productions are you working on at the moment?

16.What do you think of the house music scene in the UK at the moment?

It’s in a difficult place but there’s still some really strong nights out there.

17.Where would you like to perform that you haven’t yet?

So many places!! Australia.

18.In Your opinion who is the best DJ in the world?

19.What do you do in your spare time?

20.How do you think your going to do in the Top 100 Djs competition?

Not great…i’ve not entered!