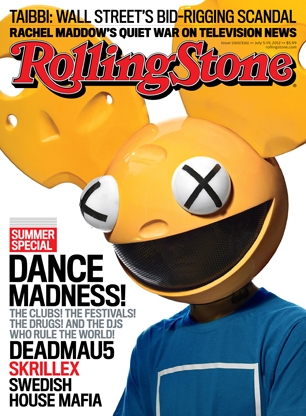 • Zimmerman slams EDM stars who show up to a live gig and press play. “David Guetta has two iPods and a mixer and he just plays tracks – like, ‘Here’s one with Akon, check it out!’,” he says. “Even Skrillex [a friend of Zimmerman’s] isn’t doing anything too technical. He has a laptop and a MIDI recorder, and he’s just playing his shit … People are, thank God, smartening up about who does what – but there’s still button-pushers getting paid half a million. And not to say I’m not a button-pusher. I’m just pushing a lot more buttons.”

• He’s still angry at Madonna for her appearance at the Ultra Music Festival in March, where she asked the audience, “How many people in this crowd have seen Molly?” – a barely coded reference to Ecstasy. “You want to be ‘hip’ and ‘cool’ and ‘funky grandma’?,” says Zimmerman. “Fine. It’s not my place to say you’re irrelevant. If you’re gonna come into my world, at least do it with a little more dignity. I understand she has millions more fans, and is way more successful than I’ll ever be. But it’s like talking about slavery at a fucking blues concert. It’s inappropriate.”

• Zimmerman routinely refuses to contribute to pop records, and he dismisses most dance music as formulaic – “Just 120 bpm with a fucking kick drum on every quarter note” – but he’s been trying to get Dave Grohl to remix one of his own songs. “Because fuck dance music, you know?”