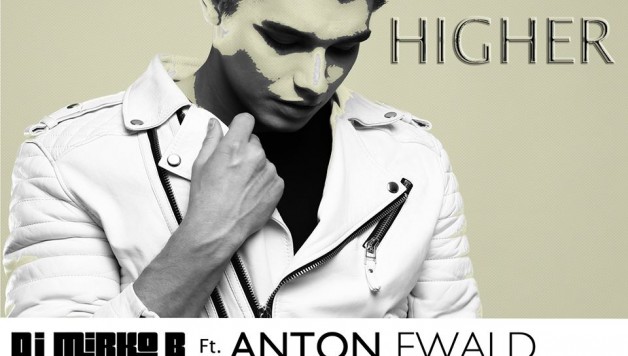 HIGHER is the latest collaboration between Italian D.J. Mirko B. and the stunning vocalist ANTON EWALD. Brescia-based Mirko Boroni, better known as D.J. Mirko B. is already a popular title in the world of EDM. Apart from being known as a first rate producer on Beatport he has managed to reach as high as #28 on top Deejay’s ‘Best DJ/Producer Charts’ and is sure to make waves within the electronic dance music scene with his Electro and Progressive House influences. Next to his radio edit and extended mix Italian top producer Maximilian Tux made the cool club edit of higher. Mirko teamed up with Anton Ewald trough his Label Sound2kill4 records Netherlands. The collaboration between the two Italian top D.J ‘s and Anton Ewald resulted in the awesome track called “HIGHER”
ANTON EWALD famous Swedish singer and dancer, who in 2013 at the age of 19, enchanted audience with his singing and his charisma. His debut single “BEGGING” was in first place on Spotify and I-Tunes after his amazing performance in the biggest TV show in Sweden, Swedish Eurovision Song Contest. Since then, Anton has sold triple platinum and gold for his singles, received numerous of nominations such as Swedish Grammy, MTV EMA’s and peoples choice awards. His latest EP
“On My Way” is named by music bloggers “EP of the year”
The Single “HIGHER” long awaited, especially by fans of Anton combines pop vocal sounds,
Thanks to the singing of Anton, the melodies and arrangement to more European Dance.

“HIGHER” is a beautiful melodic dance song that will keep us company for a pleased
period of 2015.
All 3 versions will be available from April 7th 2015 in all digital stores.